In August 2018 I gave birth to a beautiful baby girl having undergone IVF treatment in 2017. I was completely in love and felt so lucky to have her after just one round of treatment. Surprisingly not long after having her, people were asking me would I have another. SEX was the last thing on my mind, but also the option of having a second child was a big question mark for us!

With our fertility problems being on my husbands side we assumed that it would be IVF again for us when Dulcie hit around 12-18 months old, but even then nothing was guaranteed. However, unbeknown to us someone clearly had other plans for us....In January of 2019 my period was a day late, which for me was strange as my cycles had been very regular. At the time I had just returned to dancing so I thought perhaps the exercise had thrown my body off a little, but then doubt started to creep in.

What happened after that was the biggest shock of my life - a blue line!! Never have I ever felt such a mixture of emotions, and I was in total denial. I Googled the chances of a false positive and made my husband go out and get a Clearblue test just to be 100% sure. Dulcie wasn’t even 5 months old and I literally felt like I had only just been pregnant 5 minutes ago. I took the Clearbue test and yes, I was 100% pregnant.

My husband was over the moon, telling me his penis works; woohoo! I on the other hand was crying and my instant thought went to Dulcie. I just kept thinking it would be time taken away from her. I was also in utter shock, as never did I think I’d ever fall pregnant naturally.

Anyway fast forward to life with 2 under 2 and I must say, the thought of it was probably much more daunting than what day to day lifeactually is. When James bought Dulcie to the hospital to meet Olivia for the first time she looked very confused. I wasn’t sure how she would react as at her age, she wouldn’t really understand. 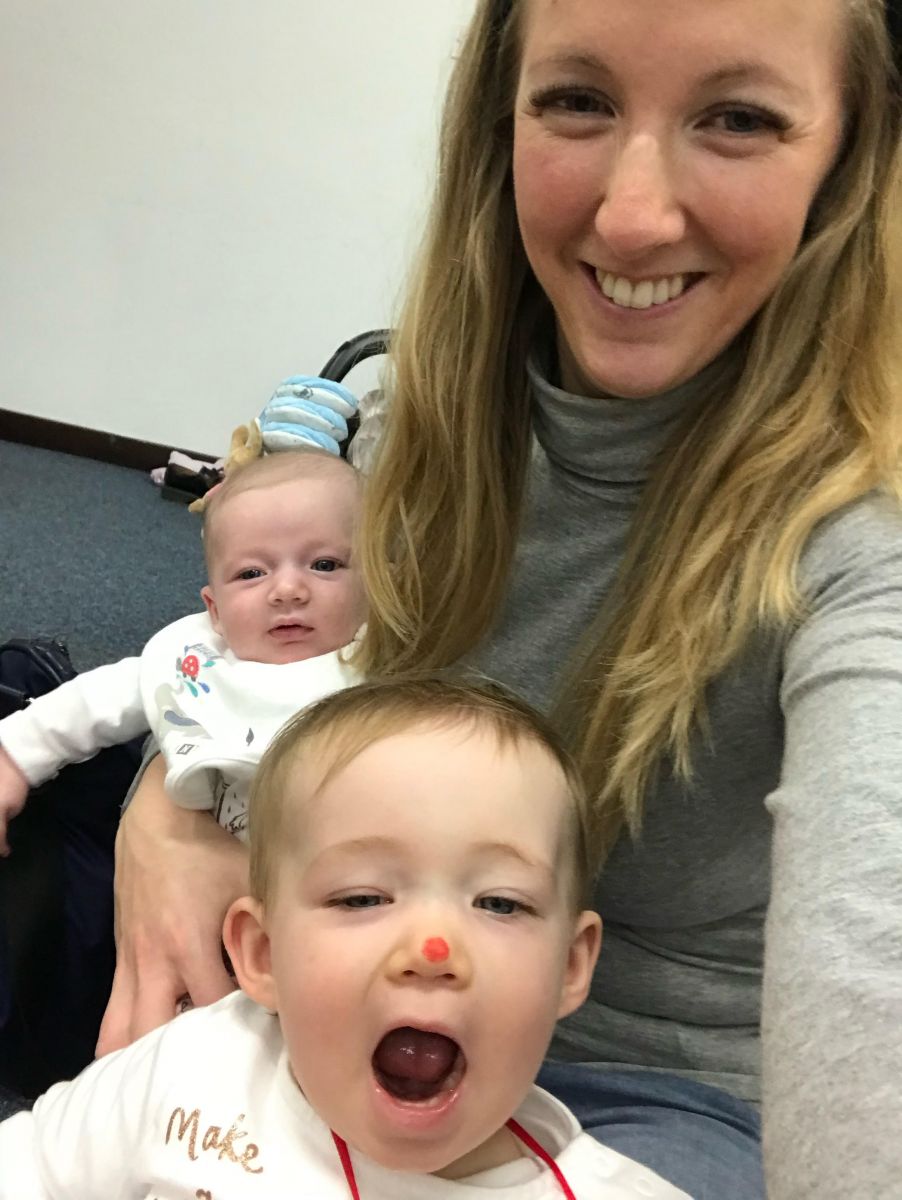 But when we arrived home my heart burst as Dulcie eagerly waited for James to bring Olivia in from the car. Dulcie was fussing around her, blowing raspberries and then touching her - it was truly magical to see.  We have had many more moments like that, but you can never guess a child’s actions from one minute to the next, so yes, we have also had some not so good times. Dulcie hitting Olivia over the head with her boot, the TV remote or just giving her a slap...I have to have eyes everywhere!

Mornings are definitely tough and I often pray that the girls wake at different times, that way I can sort one, and then the other, but of course that doesn’t always happen. I’m lucky enough that my husband doesn’t always head off to work too early so he has been around to help feed Dulcie, but again that’s not all the time.

Aside of looking after my girls I have me to look after too. I often don’t eat until 11am, maybe a little earlier but that is totally dictated by Dulcie and if she goes down for her morning nap. At this point this is when I also have a shower! If Olivia is awake I bring her into the bathroom in her sleepyhead, as the shower noise keeps her calm and settled. I’ve never been so quick in getting ready! I’ve managed to shower everyday, bar two since Olivia has arrived and that’s pretty good going. All meal times are generally the same and my husband is normally home to feed Dulcie, so that works out really well.

Throughout the day there is of course play time, but mum guilt definitely creeps in as I feel like I’m neglecting one of them at some point in the day, more so Dulcie. If I’m doing tummy time with Olivia, I’m then watching Dulcie to make sure she doesn’t trample her. If Olivia is in the play gym, again I’m watching Dulcie.

I have just felt that neither of the girls get the proper time that I used to have when it was just Dulcie. I know am doing the best I can though, and have to try to remember that. I'm looking forward to when Olivia is more mobile and the girls can play together.

Getting out of the house is much harder and at times it feels like I’m never going to get out! One of them always needs something at the last moment.....pooey nappy, feeding etc etc! However, I only have to suffer the tears for a split second as they both love the car (thankfully). But it’s also remembering to pack everything for 2 little people. There really is no downtime with 2 under 2, the only time I rest is probably after 20.30pm which is about an hour before I go to bed. It is completely relentless but I wouldn’t change it for the world; I am completely blessed to have my daughters especially after what we went through to get Dulcie!

It overwhelms me to see them every morning when I wake up, and seeing them together just melts my heart! My husband has been great, a part from in the middle of the night, but is hands on to support me wherever he can. I remember asking someone I knew for some advice as she had a small gap between her kids and she just said "survive!"

I would definitely say I’m "surviving" and just taking each day as it comes. I celebrate little wins like getting out to the doctors for 9am - I may have missed my shower but the girls were dressed and ready to go. All the hard work in these first few years will certainly be worth it, as I watch my girls grow together and make many magical memories.

After getting over the shock, and now having Olivia here, I realise that I have been truly blessed with two miracle babies, and for that reason I will get up with a smile on my face - no matter the challenges that lay ahead for that day!